"Hurry, there's something in here too."
—Isaac to Daina as he is being stalked by the creatures

The Stalker is a Necromorph that attacks its prey by means of flanking and group tactics.[1][2][3] They approach slowly and quietly in order not to be discovered whilst they get closer, making them harder to notice. They are first encountered in Chapter 4 of Dead Space 2.

Stalkers are heavily altered Necromorphs, bearing little resemblance to their original human form. Their long arms are equipped with long talons ending in sharpened tips. While not very capable at slashing, they can still impale, knock down, and rend their victims. The ribcage is displayed wide open, though as with most Necromorphs, there is a lack of any digestive organs, and only vestigial remains of previously vital organs. Well-formed musculature in the back led to a reinforced spinal column and neck capped by the creature's most distinguishing feature: A massive, eyeless, three-pronged head with only traces of original human bone structure. The skull is largely exposed, sporting a thick cap covered in bony protrusions to aid in crushing and bashing. The upper jaw and nasal cavities are left largely intact, while the cranial dome is squashed down to provide a more even, durable striking surface, which is further supported by the cheek bones. Unlike many Necromorphs, this highly mutated skull is the hardest point on the creature, and is immune to dismemberment.

Arguably the most intelligent and opportunistic of the common Necromorphs, Stalkers work in groups to distract and flank their prey.[3] They will run between hiding places, peek from behind cover, and try to lure victims into exposed areas. When they attack, they charge towards their prey while emitting a high-pitched screech, with their limbs tucked behind them for protection and streamlining. Stalkers will take turns in attacking victims when they feel they have let their guard down, then flee before they have a chance to strike back.

They are also quite resilient; while charging, their skulls and torsos are able to absorb dozens of pulse rounds without disrupting their attack, even on normal difficulty. They are redoubtable foes, and in large numbers or paired with Exploders are some of the most severe threats in Dead Space 2.

Since Stalkers attack methodically, there are certain patterns they use, one of which is peeking at Isaac. Peeking from around cover is usually followed up by a charge. If Isaac sneaks up on a Stalker from behind, it will run for new cover instead of confronting him. However, if Isaac approaches the Stalker from the front after it peeks out or "barks", the Stalker will land an unstoppable headbutt if Isaac goes around that corner. Stalkers also show awareness of being damaged, unlike other Necromorphs, preferring to bolt to a hiding spot if it receives any damage.

They also have an Enhanced form that has double the power, speed and health of its original counterpart. Following the death of the Brethren Moon over Tau Volantis, an alternate form of Stalker was encountered that exhibited a larger and bulkier morphology and a head crowned with large fang-like spines.

Stalkers are also known to act like animals, eating dead bodies with other Stalkers, as seen in Dead Space 3.

Concept art of a Stalker's skull.

A close-up of a Stalker's face. 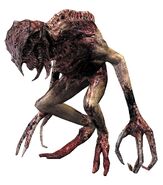 A full body-shot of a Stalker.

Another Stalker in the process of charging. 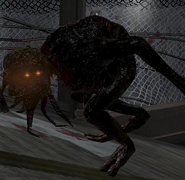 A Stalker peeking at Isaac Clarke.

A Stalker in the Titan Station Church of Unitology.

A dead Enhanced Stalker found at the beginning of Chapter 11.

Isaac against a new Stalker variant in Awakened