The Standard Engineer RIG is the most basic form of Resource Integration Gear available for engineers throughout the course of their employment. It closely resembles the Standard Astronaut RIG due to the fact that it is almost skin-tight and has a small projection system for holographic display. 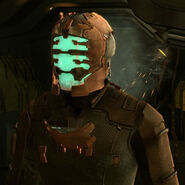 Isaac's ID card can be seen on the left side of his chest.

Standard Engineer RIG Render.
Add a photo to this gallery
Retrieved from "https://deadspace.fandom.com/wiki/Standard_Engineer_RIG?oldid=151394"
Community content is available under CC-BY-SA unless otherwise noted.