This article (Swarm), has one or more disputed facts. Please visit the Talk Page for more info, and clean this page so it meets wiki standards.

Can latch onto the player and damage them much in a similar fashion to Swarmers, making aiming difficult or impossible if there are no bodies to reanimate while also draining the player's health.

The Swarm, as the name suggests, is a swarm of small Necromorphs that replace the Infector and Swarmer in terms of role in Dead Space 3.

This particular form of Necromorph strongly resembles a scuttling crustacean or arachnid. The main attack method of a Swarm is to rush in droves to the nearest corpse and burrow into it, reanimating it and converting the corpse into either a Fodder or a Slasher. The Swarm allow for multiple bodies to be infected simultaneously to cause a quick wave of Necromorphs that can overpower the player quickly if not dealt with fast enough. If the reanimated body is destroyed, the Swarm will rush over to the next available corpse and re-animate a new body until killed. Quickly dismember the body before the Swarm gets to it, or destroy them before they can reanimate a body for better breathing room. 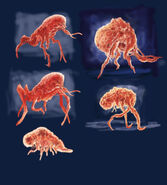 Isaac being attacked by the Swarm on the CMS Terra Nova

Isaac turning into a Necromorph (Fodder)

The transformation of corpses into Fodders and Slashers