Dead Space Wiki
Register
Don't have an account?
Sign In
Advertisement
in: Necromorphs, Bosses, Alien based forms,
and 3 more
English

The Blood Moon orbiting Tau Volantis was a massive Necromorph and one of the Brethren Moons that are the origin of the Marker signals. It was the result of an incomplete Convergence Event: The last stage of Necromorph evolution.

The Moon served as the final boss of Dead Space 3.

The Moon over Tau Volantis was incomplete, with a huge portion of its outer organic shell missing. It was clear that the sudden halt of the Convergence Event damaged the moon, and as such it was only in a nascent stage.

While in hibernation, the Moon's sensory organs stayed tucked within its inner cavities, and its tentacles remained coiled beneath the surface. While in this dormant state, it was unable to communicate with its fellow moons, as evidenced by the Moons' silence during the SCAF expedition. It did, however, continue broadcasting through the Markers, presumably allowing it to control swarms of necromorphs and work to gather biomass for completion of Convergence.

The mouth of the Moon as seen in the final halo-jump phase. 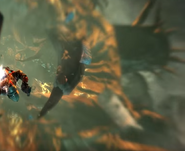 Some of the fin-like appendages on the neck area.

The Moon's inner-eyes and mouth.

At an unspecified point in the past, the alien civilization native to Tau Volantis discovered a Black Marker. Influenced by the Marker's signal, the aliens studied the Marker and created numerous copies, perhaps out of religious reverence or in order to harness the near-limitless energy offered by the devices. The Markers eventually caused either one or multiple Necromorph outbreaks.  As the infestation overran the planet, the Black Marker had access to sufficient biomass and triggered a Convergence Event.

Billions of Necromorphs and corpses were pulled into orbit by the Marker, where they began to assemble into a mass resembling a planetoid: A newborn Brethren Moon. The surviving aliens, whome had presumably prepared for such an event, activated a powerful Machine, which xenoformed the once oceanic Tau Volantis into a frozen waste, stopping Convergence. The Machine has a secondary function, namely to drag the moon out of the sky and crush it within the planet's gravity well, but the aliens hadn't configured it fully, and this second phase was never initiated. It can be assumed that the aliens' vast technological advancement (evidenced by the Machine and their supercharged TK) was partially due to the enormous power provided by the enormous quantity of Markers they had created.

Its birth foiled by the aliens, the half-formed moon remains in orbit, presumably either unconscious or unable to call to its brethren. Regardless, its signal is broadcast through the Markers, which continue to affect and generate the hordes of Necromorphs on Tau Volantis, both those of SCAF and those buried beneath the ice.

Two million years later, after Jacob Danik deactivated the Alien Machine on Tau Volantis, the Moon was able to re-initiate the Convergence Event that it began long ago. When Isaac Clarke and John Carver completed and reactivated the Machine, the Moon was pulled straight down onto the surface of Tau Volantis and killed. Before leaving the planet for Earth, Ellie Langford confirmed that the Moon's Marker signal ceased.

However, this was not the end of the Necromorph threat. Before it died, the Moon contacted its dormant brethren throughout the galaxy, calling them to feed. The other Moons began broadcasting the signal anew, allowing the Necromorph infestations on Tau Volantis and elsewhere to resume.

The Moon is the final boss of Dead Space 3. Before the actual fight begins, Isaac must fly toward the Moon's mouth while dodging falling debris and one of the creature's massive tentacles. When he reaches the interior of the mouth, he crash lands on a large circular platform that was sucked in along with the Alien Machine. Regaining his footing, Issac comes face-to-face with the Moon's mouth, initiating the fight.

The Moon is impervious to every weapon in Issac's arsenal. The only way to defeat it is by destroying the three eyes located around the inner mouth. In order to achieve this, Isaac must stand on the glowing circle located on the middle of the platform to enhance his Kinesis Module. He must use the enhanced Kinesis to grab one of the Markers floating outside of the platform to launch it directly into the eye to destroy it while avoiding the Moon's counterattacks.

The Moon attacks by shooting out rocky, Marker-esque projectiles. Each of the projectiles lands on the edges of the platform upon which Isaac stands, inflicting damage on Isaac if he is on one of the landing spots. After a few seconds, the projectiles burst open, releasing either a Slasher or Twitcher.

The Moon's second and most dangerous attack is to use two of its gigantic tentacles to pull the platform right into its mouth and down its gullet. This results in instant death if Isaac fails to destroy the tentacles in time.

Face of the Tau Volantis Moon

The Moon's "guts", after having the machine being pulled from them.

Flying towards the Moon.

Art of the dead Moon on the wrecked surface of Tau Volantis.

The Moon crashed on the surface (texture from game files) 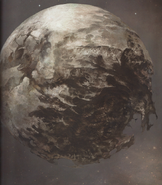 Concept art of the Necro Moon

Concept art of Clarke and Carver facing the monster. 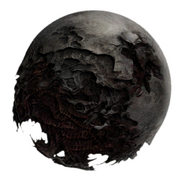