Tentacles are either stationary Necromorphs that belong to no other creature or they are part of a bigger Necromorph.

They appear to be formed from muscle tissue, internal organs and possibly, bone. This area is heavily armored and resistant to damage from any weapons that Isaac may use against it. Located in between the "tip" and "stem" area, a large sack filled with yellow glowing liquid can be seen. This area is not as heavily armored as the rest of a Tentacle and thus is susceptible to damage if a weapon is fired at it. This spot connects the "stem" and "tip" areas of a Tentacle.  The  purposes for which the liquid filled sack serves  is unknown.

Tentacles emit loud elephant-like roars when they are far away or when they appear out of nowhere as a scare-factor. They can also be heard emitting loud and high pitched screeching noises. It is unknown how they produce these sounds as they do not possess any visible mouths or anything else that could produce any animal-like roars.

The first variant, known as a "Drag Tentacle"  usually tends to attack Isaac by launching out of a hole that it has made in an area, and grabbing a hold of him. Once it grabs hold of him, it will knock him down onto the ground and proceed to drag him back to where it came from while periodically slamming him onto the ground in an attempt to damage him.

.In the Aegis VII incident, Isaac only encounters a total of three tentacles that attempt to pull Isaac into a hole they have punched through previously. When Isaac first encounters one, he will witness a bunch of body parts littered on the walkway near where the first Drag Tentacle attacks him.  These were all that left from the tentacle's previous unsuspecting victims. In Dead Space 2, Drag Tentacles are only encountered a total of once (two if one counts the hallucination tentacle that Isaac encounters).  Usually the areas where Tentacles appear are filled with Corruption and often, some Tentacles can be seen growing through the Corruption . They are stationary however. It is possible that the Tentacles that attempt to pull Isaac are part of these Corruption hives.

Some tentacles, however, are part of a larger Necromorph . The Leviathan possesses three rhizome-like holes where tentacles will sprout out of and attempt to smash Isaac. It seems that the Leviathan uses the Corruption to grow limitless supplies of tentacles for various purposes, like blocking off entryways as seen on front of the food storage in Ishimura. If one of the three tentacles is cut off, the Leviathan will grow more in a matter of minutes. How the Leviathan manages to do such a thing or it is possible that it had a storage of ready made tentacles located in the Corrpution biomass all around Ishimura. The Slug and the Urchin also have tentacles similar to the Leviathan that serve the same purpose. However, the Slug uses the Tentacles as its "arms" to throw objects in self defense towards Isaac once he turns the Ishimura 's  ADS cannon against the creature.

The other variant, the "Guardian Tentacles" are typically encountered in  large areas appearing to be protecting something. These tentacles usually remain dormant underneath a pile of objects or something that keeps them hidden from sight until an unsuspecting victim comes up to them. Once that happens, the Tentacles will make a loud roar and begin to attempt to smash into their victims. These types of  Tentacles are specialized in "guarding" due to having their tips modified into a boulder-like shape to in order to maximize the effectiveness of their smashes and increase the weight on the tip of the Tentacle in order to create more damage. Several Guardian Tentacles are encountered in various areas in the Aegis VII incident. They are first dealt with inside the Cargo Storage area of the Ishimura, trying to prevent Isaac from reaching the Red Marker stored within the storage area. They are then encountered again along the catwalk located on the Aegis VII Colony leading to the site where the Marker 3A was originally located before its extraction to the U.S.G. Ishimura. Strangely, no Guardian Tentacles are ever encountered in the Sprawl incident.  Guardian Tentacles are however encountered once again years later. They first are  fought off inside the crossover tube on board the CMS Roanoke as Isaac and Carver attempt to restore power to the derelict ship. Later on throughout the game, they are encountered and have to be fought off again as Isaac and Carver try to navigate through the Alien City in hopes of trying to stop Jacob Danik from reactivating the Alien Machine . Several large Guardian Tentacles are lastly encountered near the end of the game blocking a walkway after the Tau Volantis Moon is awakened.

Sometimes, massive Tentacles can be found blocking Isaac or Carver's path, requiring them to blow up a specific object for the Tentacles to move. Large Tentacles like this are encountered in the Tripod's Nest and on various locations years  later , such as inside the power core of the CMS Roanoke and all over Tau Volantis .

Guardian Tentacles appear mummified like the rest of the Necromorphs encountered throughout the events of the Tau Volantis conflict. The "stem" area isn't partially red like the ones in the previous games but is now completely grey with a few black patches. The liquid sack is also more red in color and glows brighter than before. 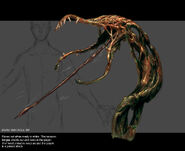 Isaac struggling to free himself from a Drag Tentacle.

Isaac with his Military RIG being dragged by a Tentacle.

A Tentacle encountered in Dead Space.

Tentacle retreating after Isaac and Carver manage to reactivate the CMS Roanoke's power core for the second time.

A mummified guardian tentacle in the Alien Machine