Presumably a Regenerator-type Necromorph called "The Bully" was an early prototype for the Necromorph in Dead Space 2 that would later be replaced with the Ubermorph.

The Bully can be found from the Dead Space 2 game file archives. Judging by its files, it would have made the common Regenerator sounds and would have had the same animations.

The Necromorph has its own concept art and finished model, but for reasons unknown, it was scrapped from the final production.

Face of the Bully

Concept art of the Bully 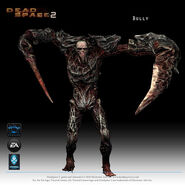