Church of Unitology
The Circle
The New Cult

"They will find us. They will devour us. We will be made whole."
—The Cult Leader's dying words

The Cult Leader was a member of the Circle and the leader and self-proclaimed Prophet of the newly-formed Unitologist Cult on the CMS Terra Nova. He was the main human antagonist of Dead Space 3: Awakened.

After the death of Jacob Danik and the destruction of the Tau Volantis Moon, the remaining Unitologists of the Circle were seemingly contacted by the Brethren Moons and ordered a massive recall of the survivors on Tau Volantis to the CMS Terra Nova in orbit. There, a group of Unitologists splintered off to form a new Church, made "not of brick and mortar, but of flesh and blood", as they declared their belief that the Moons were coming and were "hungry". One anonymous individual became the leader and prophet of this new Unitologist cult. He and the other survivors began to ritualistically mutilate themselves, sawing off body parts as offerings to the approaching Moons.

When Isaac Clarke and John Carver arrived on the Terra Nova, they experienced several hallucinations in which they saw the prophet carving off a man's hands, presumably Randall Carr, and repeating this act throughout the ship. The prophet seemed to act as the voice of the Moons, taunting Isaac in several severe hallucinations, causing the engineer to begin doubting whether he and Carver should return home or not which resulted in them arguing.

During several of these hallucinations, the prophet displayed several supernatural abilities ranging from immunity to physical harm and teleportation. After Isaac and Carver retrieved the ShockPoint Drive, Isaac made a break for the reactor of the Terra Nova to destroy it, convinced that it was the only way to protect Earth from the Moons. The prophet appeared once more in a final hallucination where Isaac and Carver discovered that the man could be harmed if they destroyed one of the Markers within the hallucination.

After destroying three Markers and shooting the Cult Leader, their connection to the Moons was broken, though he warned Isaac and Carver that their chance to warn the Earth had come and gone. When the hallucination ended, Isaac and Carver stood victorious over the defeated and wounded prophet who continued to rant and rave. He declared that the Moons would still find Earth and everyone would be "made whole". Isaac could either execute the Cult Leader or let him live, but his words still came to pass. If the player spared the prophet, he’s either killed by the radiation leak from the reactor or from the explosions made when the reactor reached critical.

Once the fight was over, the Cult Leader would kneel dying in front of Isaac and Carver. The player(s) could kill him with a single shot or leave him be and proceed with the mission.

Choosing either to kill or spare him rewarded the players with two mutually exclusive achievements/trophies, "Heretic" if the Cult Leader was to be killed and "True Believer" for the opposite. 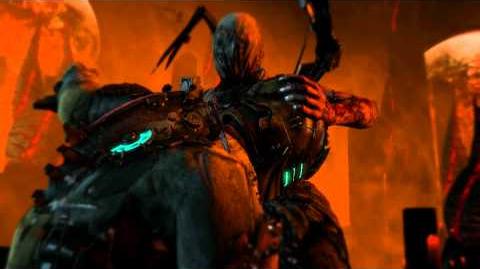 The Cult Leader after being defeated by Isaac and Carver.

The Cult Leader performing the ritual on a Circle member.

The glowing Marker inside the Cult Leader-controlled hallucination.