"Real terror, in rock style!"
—Description of the The Devils Horns.

The Devil Horns appears in Dead Space 3 as the most powerful weapon in the game, unlocked after completing the game on Classic Mode in New Game+ . Similar to the Hand Cannon in Dead Space 2, It is a (mostly) one-shot kill weapon, with the main function being "Bang!" and the alt-fire being "Pew Pew!". When reloading, Isaac will perform a "rocking out" animation, and a metal guitar riff will play.

The weapon is modifiable, with the option to add or drop the alt-fire to it, and can add circuits to the tools if unlocked with Tungsten. This serves very little purpose, since the stats are already very high (visually maxed out). A common strategy is to increase RLD or SPD, as those are the most noticeably affected.

To unlock The Devil Horns, you must first beat the main campaign. Then, you have to play over again with the New Game+ mode, but have difficulty set on "Classic." Once you beat Classic mode on New Game+, you should have the weapon.

A screenshot of the settings of the weapon on Bench 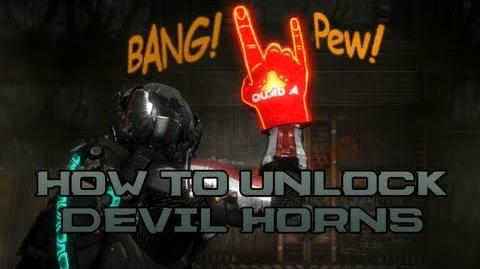 Retrieved from "https://deadspace.fandom.com/wiki/The_Devil_Horns?oldid=154451"
Community content is available under CC-BY-SA unless otherwise noted.