"This time there will be no escape for you, my friend. You have been most resourceful up until now, but my creation is free, reborn in the fierce heat of life itself! Now it's time to play your part..."
—Challus Mercer to Isaac Clarke[1]

The Hunter was a Regenerator type Necromorph, biologically engineered by Doctor Challus Mercer on board the USG Ishimura. It was created by inserting a piece of necrotic tissue, obtained from the flesh-like growths covering some sections of the Ishimura directly into the cranium of a live, unknown crew member thought to be Brant Harris.

The Hunter physically resembled a Slasher, possessing large blades that are attached to a pair of elongated arms jutting out from its shoulder blades. It was noticeably bulkier and taller than the standard Slasher and its original arms appeared to be bound inside the flesh of its torso similar to a straitjacket. Unlike the other forms of Necromorphs, it was able to regenerate lost limbs in seconds, meaning that conventional dismemberment tactics only served to temporarily incapacitate it. The Hunter's voice could be compared to a deep throaty roar as it was opposed to the Slasher's usual form of screaming and shouting. Just like the other Regenerating and Enhanced Necromorphs, the Hunter's eyes are glowing, although not as strongly as the other Regenerators'. The victim's jaw is gone with 4 tentacle-like veins hanging in place along with the neck frozen into a 45-degree angle. The big toes severely enlarged into sharp claws. The body is greatly covered in muscular tissue with no original skin left due to the mutation. Pieces of different bones can be seen pointing at different body parts. The spine and the pelvis bone can be seen at the back.

The Hunter first appeared during Chapter 5: Lethal Devotion. Challus Mercer kept the creature stored in a stasis tube in the Chemistry Lab on the Medical Deck, just outside the Cryogenics Storage Room. When Isaac entered the lab to mix the poisonous compound, Dr. Mercer awoke the creature in an attempt to kill Isaac. Isaac eventually escaped after learning about the creature's regenerative abilities. The creature stalked Isaac throughout the chapter as he attempted to complete his objectives. Isaac finally faced it down in the Cryogenic Lab where he managed to freeze the creature inside a cryogenic tube, supposedly taking care of the problem once and for all.

However, as the game progressed, it was hinted that the creature was thawed and was once again stalking Isaac as Isaac heard the creature several times and even saw it once while in the main elevator in Chapter 7[note 1]. In Chapter 8, shortly before the first Store, the Hunter could be heard growling and sharpening its claws.

The Hunter reappeared in Chapter 10, just after Isaac collected the third Navigation Card. Immediately after grabbing the card, Dr. Mercer contacted the player and revealed that he thawed the creature. Right after this transmission, the Hunter burst out of a ceiling vent and attacked, forcing Isaac to retreat.

Toward the end of the chapter, when Isaac went to test fire the engines of the shuttle in the Executive Shuttle Hangar Bay, the Hunter once again revealed itself and attempted to kill him. To defeat it, Isaac lured it toward the back of the shuttle, stalled the Hunter via either Stasis or dismemberment and test fired the engines again, completely incinerating it. It dropped a Power Node where it died.

Look for ways to stop or, at the very least, slow the Hunter. If there are points where the Hunter could get caught up on (low ceilings, doors with Node locks, barricades), use them! If there are throwable objects you can use to dismember limbs (Blades of Slashers, sawblades, etc.) or to stun it (exploding canisters, heavy objects, etc.), then use those, too. For example, in Chapter 10, after you collect the third navigation card, lure the Hunter to the room with the movable bunk beds. You can create a barricade to simply protect yourself. But note, there are a series of ceiling vents that the hunter will use if blocked, so plan your movement.

Cut off the limbs of the creature, most effectively done with a Line Gun or Ripper, and then put it under stasis once its limbs start to regenerate. This will buy you a lot of time to attempt to leave the room.

If you can exit the room immediately, do so. In some situations, you will be locked in the room with the creature until Kendra unlocks the door. That's the only time you should confront the creature.
At the end of Chapter 5, when you confront the Hunter in the Cryogenics room, lure it to the end of the room with the stasis recharge. Make it follow you into the middle section, then take out its legs and / or stasis it, and run into the small room at the other end, which will be unlocked. Make sure the Hunter is in the middle section, then use the holographic panel to freeze it. Likewise, near the end of Chapter 10, the Hunter must be lured to the back of the shuttle and then put into stasis and/or dismembered. There, you should activate the engines to incinerate it for good.

The Hunter does regenerate, but under serious pressure you may not think about that. Use your ammo efficiently by removing its arms to avoid its heavily damaging attacks; slice off its legs to knock it onto the ground and slow it down. An alternate solution to dismemberment is by using the Force Gun or the Contact Beam's secondary fire, which can knock down and briefly stun the creature. This tactic also gives you time to escape.

Knocking out its legs to slow it further is a great tactic. Save your stasis ability for after you've taken down a few of its limbs, then stasis it and run. In a crowded room however, do not simply think stasing it will cripple it. Watch out for any movement it makes as it can score a few hits on Isaac if he's too distracted even when slowed down, which can be fatal on Impossible.

Keep a Stasis Pack or two handy when in chapters encountering the Hunter. Also, make sure that you upgrade your Stasis Module so that you have more shots AND that the shots have a longer effect. A quick way to escape is to take off most limbs (i.e. leg + arm) while it enters its regeneration stage. Freeze it and run! This is also useful in situations when it needs to be in a certain place (quarantines, the shuttle hangar, etc.).

When other enemies are near while confronting the Hunter, it's a relatively good idea to eradicate them instead of focusing on the major threat. This tactic is especially useful when there are Twitchers around, as the Twitchers can kill you quickly if you choose to ignore them. Keep moving, take out a limb or two, and freeze it, then attack the remaining enemies and repeat if necessary. This strategy is wonderful for those of you who collect items.

If all else fails, you can conserve ammunition and health by simply avoiding the confrontation (most of the time) when things just seem too dark to handle! Remember, this is a "survival-horror" title.

If you're low on Stasis energy and Kinesis isn't effective enough, you can slow it down by blowing off its legs (or one leg to save ammo). Don't forget to watch out for its support. The Hunter will only regenerate its legs when you are far from it, so running around can prevent it from regenerating.

While it is the "boss" of the level, the Hunter's primary threat is being a bullet sponge. If there is enough room, ignore it, kill any other Necromorphs and outrun it until you're in a position to defeat it. 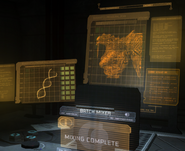 A photo of the Hunter on Mercer's computer.

The Hunter looking at the half dismembered Isaac.

The Hunter looking at the player after finishing off Isaac.

Close-up front view of the Hunter. 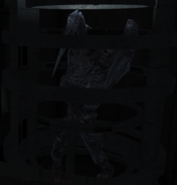 Hunter in Chapter 7 of Dead Space.

The Hunter is finally killed by the intense heat from the shuttle engines test firing.

The Hunter cameo in Dead Space 3 (notice how the model has broken texture mapping due to it still using the original UV map from the first game).