"Aw shit, this one's regenerating!"
"How are you going to kill it!?"
"I'm not!"
—Ellie Langford and Isaac Clarke

The Hunters are Regenerator-type Necromorphs that appeared in Dead Space 3. They bore a significant resemblance to the Hunter created by Dr. Mercer and Ubermorph, and shared the same regenerating abilities. From various logs and game clues, it was implied that the Regenerators are the former members of the Deep Dig Team on Tau Volantis.

In basic body shape, the Hunters resemble the original Hunter more closely than the Ubermorph. However, they maintain the same smooth skin as the Ubermorph, although they have large gashes in their abdomens and appear to have Unitology markings inscribed on their bodies. This latter trait suggests that they are former members of the Deep Dig team, whose logs state that when they had no surface to scrawl marker symbols on, they would use their own flesh. The Witness RIG, which was confirmed to be the suit worn by the Deep Dig team, is covered with the same symbols.

The Hunters are created sometime during the S.C.A.F. expedition to Tau Volantis when the members of the Deep Dig Team are digging into the surface of Tau Volantis. They are eventually subjected into dementia and madness due to all the markers, and claim to be witnesses of the truth scrawling marker symbols on flesh when no other surface is present, they eventually mutated into Regenerators and they are contained in small transfer boxes and delivered to the CMS Terra Nova and some warehouses on Tau Volantis. But, the Scenario Five order was initiated and the captured Hunters are left to be undisturbed on Tau Volantis.

Two hundred years later, during Chapter 5: Expect Delays, Isaac Clarke and Sgt. John Carver cleared the cargo on the Terra Nova's tram tracks, accidentally letting the Hunters loose on the ship. When they reached the Terra Novas cargo hold, the first of these creatures freed itself from it's tube, initiating a chase. Not long after the first encounter, a second Hunter came out of a vent and also gave chase to the duo. They reached the tram station and activated the tram's services, but until it arrived, they fended off the assault of the Hunters and their allies. Even at the Aft station, the Hunters still gave chase, especially after Ellie accidentally began the launch procedure and knew no way how to undo the action. As the Crozier proceeded to launch out of the station, hordes of various Necromorphs and Hunters appeared and attacked Isaac and Carver in their attempts to end the launch sequence. The duo finally went to the engine room and found explosives jarred in the gears. They made use of the auto-cannons set in place there and began unjarring the gears. As they did so, the Hunters along with the Slashers as backup made their final attempt at killing them. The beasts met their ends at the hands of the auto-cannons, however and Isaac and Carver unjammed the gears and are sucked out into the vacuum of space, directly under the tram's road.

On Tau Volantis, Isaac encountered the Hunters in the Marker Containment areas underneath Tau Volantis. They appeared to be locked in their boxes, but more appeared from the ventilation ducts and attacked Isaac and Carver. When Isaac reached the small room containing the Suit Kiosk, Bench and an elevator, three Regenerators appeared and chased Isaac and Carver in a gauntlet run until they both escaped and returned to the underbelly of Tau Volantis.

Due to their regenerative abilities, killing them with regular weapons is outright impossible. The best you can hope for is to temporarily slow them down by blasting off their legs or disarm them in the same fashion. The Line Gun, Shotgun, Hydraulic Bayonet, or any weapon utilizing one of those three attachments are most effective, especially when paired with a Stasis Coating attachment. Much like the Übermorph and original Hunter, the best thing to do is completely dismember the Necromorph before putting it into stasis. If you are out of stasis and/or low on ammunition, concentrate on the legs of the Hunter, as this forces it to crawl towards Isaac, greatly slowing it down, albeit for a short period of time. If there are multiple Hunters, then stay calm and use a powerful, area damage weapon to stay safe.

The only real way to destroy Tau Volantis Hunters for good is by using stationary turrets, such as the auto-cannons in the room where Isaac and Carver must unjam the gears. Interestingly, the Hunters can withstand the fire from the shuttle engines in the CMS Terra Nova, unlike the first Hunter in Dead Space. It is possible that the older design of the shuttle accounts for the discrepancy.

A side-view of a Tau Volantis Hunter 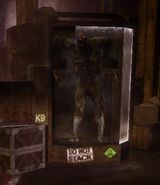 Concepts leading to the final design

Start a Discussion Discussions about The Hunters (Tau Volantis)