John Carver: "Are you sure this is working? I think we're just pissing it off!"
Isaac Clarke: "No, it's working, keep going!"
—John Carver and Isaac Clarke while fighting the Nexus[1]

The Nexus[2] is a Necromorph hive mind variant encountered on Tau Volantis. Much like the Hive Mind encountered on Aegis VII, the Nexus serve as ground commanders for lesser Necromorph forms, telepathically broadcasting Marker signals and coordinating infestations.

Several Nexus forms are encountered by Isaac during the events of Dead Space 3, all are initially found frozen solid, although one later thaws and revives.[3]

In order to continue progress in the mission in stopping the Markers, Isaac has to activate nerve clusters inside a live Nexus' body cavity, that are used to tracking down the Alien Machine. However, the Nexus is irritated by this and attacks Isaac, Carver, Norton and the Unitologists who previously attacked the crew.

Isaac and Carver successfully manage to take down the enormous beast, with it finally collapsing to the ground, dead.

The Nexus are gargantuan crustacean-like Necromorphs of the same hive mind sub-species as the one encountered on Aegis VII. Although only the upper body section is shown during the boss fight with the Nexus specimen 001, the rest of the body is shown on a table showing its external anatomy. It appears to be created from at least one corpse belonging to the extinct alien species native to Tau Volantis; its "head" resembles the skulls of the alien skeletons seen later in the game, hence the difference between the two giant Necromorph encountered in the series.

The Nexus Necromorphs possess four known limbs which they use to attack with. The head are very mantis like and have four eyes separated by large fleshy openings down their crowned foreheads. Their vertically split mandibles, when open, reveal two large claws and five large pustules which surround their mouths. The chest cavities open to reveal a large glowing pulsating sac similar to the Hive Mind in Dead Space. They also have 4 similar appendages to the Aegis hive mind on its back. It is unknown what the purpose of these are but it is possible they act as "antennas" that broadcast the Marker signal to the other Necromorph pawns and also receve it from the Markers and the Moons. During combat, they use four of their long limbs to attack while two blade like arms rest behind the head. They attempt to smash their victims or suck them inside their mouths, down into their stomachs where the Nests that are located will take of them, if they aren't drowned in the liquid that is in the stomach.

The Nexus have hollow internal chambers which are covered in Corruption strands. Cyst-like nerve clusters are located in the corners that are sensitive to damage and also are part in broadcasting the Marker signal. If shot at, they will summon Enhanced Feeders (that have been feeding on their insides to make themselves stronger) to defend the stomach, quite similary to white cells in a human body.

The Nexus specimen fought against can shoot many red pustule projectiles that explode upon contact and swing their massive claw-like appendages down on the player. When the pustules aren't disturbed, Feeders can burst from them and attack. The player must first target a large sac on its stomach, then destroy two of the yellow pustules on its mouth while the Nexus attempts to swallow the player. This must be repeated twice before the second fight sequence.

After shooting all of the yellow sacks, the specimen attempts to swallow Isaac and Carver a third time and they are slowly pulled into its stomach. They are plunged into an organ filled with an acid substance.  After being attacked by three Nests, the Nexus spits them out. After several seconds of a frenzy, the Nexus collapses, dead.

Nexus sucking Isaac into it

Concept art of the Nexus' stomach

The three Nests inside The Nexus 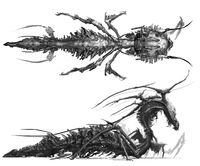 Nexus concept art - top and side

Concept art of the head.

Inside the Nexus-001's warehouse (upstairs).

Inside the Nexus-001's warehouse (downstairs)

Concept art of the Giants