"We are not authorized to interface with military or civilian operations, except as they directly concern our priorities."
—The Oracles[1]

The Oracles are an enigmatic organization who appeared in Dead Space: Salvage and Dead Space 2: Severed.

The Oracles are depicted as mysterious men dressed in white who made their first appearance in a meeting with David Chang. They informed him about their involvement in the retrieval of the Ishimura. One of the Oracles implied that the authority of their superiors went well beyond that of most of the Earth Government authorities and they are not authorized to interact with either civilian or military operations unless the situations "directly concern our priorities". This suggested that the Oracles are only brought out for operations of the highest importance.

Later, when Julia Copland betrayed the Magpies to contact EarthGov and arrange a kind of deal in exchange for the Red Marker shard that she stole, the Oracles are brought in to interrogate her. After learning everything that they could from her, one of the Oracles expressed their gratitude for Copland's aid. Copland asked for a reward and the Oracle responded by merely holding her hand. A ring on the Oracle's hand glowed with a blue light and moments later, Copland fell to the ground, dead. She was bleeding from her nose. This meant that their 'rings' are some sort of weapons or tools which possessed the capability to kill someone in such a way.

The Oracles eventually located the Ishimura, presumably using Copland's information and boarded the ship. They noted that 'reanimation already started', showing their familiarity with the Necromorph contagion. They began searching the ship for some signs of the Marker, employing unusual laser weapons along the way, using them to dispatch several Necromorphs and even a new Hive Mind. Eventually, they found and confronted Stefan Schneider. Schneider, fully aware that they could stop him and take the Marker shards at any time asked why they chose to chase him instead. The Oracles told him that they need to "know what you know and what you saw."

Schneider said that they could have asked and the Oracles said that "you did not possess the language to tell us." They also referred to the Necromorph outbreak as "an unfortunate side effect." After a brief struggle, Schneider managed to escape the Ishimura using the stealth ship that the Oracles arrived in, leaving the two agents to be slaughtered by the Necromorphs.

During the outbreak on Titan Station, the Oracles arrived in search of Lexine Weller. The two men exhibited the same mannerisms and behaviors as their brethren in Salvage. They are described by Lexine to Gabe Weller as strange men "dressed in white". They searched the Psych Ward for Lexine's whereabouts for the duration of Gabe's journey through the Titan Memorial Medical Center.

When Lexine was captured by Victor Bartlett, the colonel demanded to know why they are following him. He tried to tell them to follow the orders given by Hans Tiedemann to eliminate the "key subjects". Their answer, however suggested that they are following orders opposite of Bartlett and used finger rings with apparent stasis abilities to subdue Bartlett. They captured Lexine and took her to the hospital shuttle bay. There, they are killed by two Infectors who transformed their bodies into Twitchers[2]. 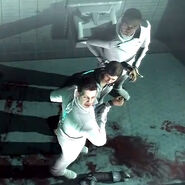