"The Pack. Before the outbreak, the Sprawl contained a lively population of youth, who contributed to the community's vibrant energy. Now, as the Pack, they move as one, engulfing their prey, leaving nothing in the wake of their destructive path."
—Official Bestiary

The Pack refers to a group of Necromorphs that attacks its prey using overwhelming numbers. These are one of the few Necromorphs created from the bodies of children.[1][2]

To say that the Pack is made up of individuals is not entirely correct; rather, they act as a predatory gestalt with each member working with others surrounding it to act as a greater whole. Only in very rare occasions are these Necromorphs ever encountered one at a time.

Compared to other Necromorphs, the extent of mutation invested in each member of the Pack is minimal, showing a certain economy of recombination not before encountered. Made from intact, largely undamaged adolescent corpses, the Pack still shows signs of how it died, with the abdominal injuries ripped open and the desiccated, colorless skin. Whatever is left of the fingers are reinforced and lengthened into stiff, bony claws suitable for slashing, rending, and stabbing. The wrist has likewise been reinforced, the palm and fingers elongated for gripping and ripping. The shoulder blades have been extended outward from the rib cage, and dense muscle and tendon mass ripples in the new cavity, running down the length of the arms, enhancing their strength. These particular mutations let the Pack tear their victims limb from limb.

Beyond the previously mentioned changes, there are few other major transformations, and the disfigurement around the mouth, nose, and eyes looks to have stopped before it was fully formed. The soft tissues of the lips and nose have been sloughed away, and the teeth only show the most passing changes. The lower jaws are overstuffed with large, peg-like protrusions, while the upper jaw is filled with a barely organized row of fangs. The eyes have simply atrophied into their sockets.

The rest of the Pack remains unchanged, and for reasons unknown this seems to have rendered the creatures extremely vulnerable to injury compared to other Necromorphs. A single low caliber Pulse Rifle round is able to cause dismemberment, and even cut the Pack in half at the torso. This evidences a highly stressed or poorly maintained skeletal system and connective tissue network.

Perhaps due to this fragility, the Pack attacks by overwhelming its prey with numbers and sheer ferocity. Moving fast and constantly shrieking, sections of the Pack maintain cohesion via auditory cues, rushing into an area and sweeping over their victims in a storm of violence from all sides.

They are notorious for still using their childlike vocals to scream at their victims, most likely causing disorientation, confusion, and panic. The pack will continue to barrage their prey with their terrifying screams in addition to their clawing and slashing, making the pack one of the most terrifying and loud Necromorphs on the Sprawl.

The Pack is replaced by the Feeders in Dead Space 3, who share similar fragility, tactics, and fighting style, but are taller, skinnier, and blind. However, they do appear in Dead Space 3: Awakened.

In Dead Space 2 Multiplayer, the Pack has a three-second respawn timer. Their purpose, when controlled by a player, is the same as a computer controlled one, to leap about and ambush unsuspecting prey. The best tactic to utilise as the Pack is to take advantage of their high maneuverability to dodge and or prevent predictable enemy lines of fire. They are weak just like in single player, but if used correctly, they can be a very deadly adversary. It is often recommended for Pack players to team up together, as their frighteningly rapid respawn timer makes them a constantly-advancing threat to the enemy team, and when travelling in pairs can make extremely short work of any lone human player.

Early concept for the Pack.

More finalized look of the Pack.

Concept art close to the look of the final production.

Back view of the Pack.

A close up of a Pack member's disfigured face.

Isaac aiming at a couple of Pack members backed up by a Slasher.

A Pack member about to decapitate Isaac.

An advertisement for a contest on the Dead Space 2 website featuring a Necromorph of The Pack attacking Isaac.

Isaac fights the Pack in the Sprawl Transport Hub.

Featured in the multiplayer trailer.

The pack as it appears in Dead Space 3: Awakened 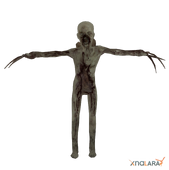 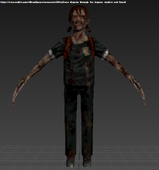