The Peng Treasure is a type of 'prize' found in all (single player) installments of the Dead Space series. The Treasure itself is molded into the shape of a woman. The Treasure may be obtained only once throughout a single playthrough, but can be obtained again upon a subsequent playthrough of the single player campaign. Once obtaining the Treasure, the player is awarded an achievement/trophy, and may sell the item at the Store for a great sum of Credits.

In Dead Space, the Peng Treasure is only accessible in Chapter 11 of the game, although the Treasure can be seen in the very first level, Chapter 1: New Arrivals (however, it is unattainable at that point due to the player not yet being in possession of the Kinesis Module). The Treasure can be found and picked up by Kinesis in a dividing lane between two entry lanes in the hangar bay. It is located on the floor between the two large walkways. Once you obtain the Peng Treasure, you will unlock an Achievement/Trophy titled "There's Always Peng!" Which is worth 15 on Xbox 360, and a Bronze Trophy on PlayStation 3. The Peng Treasure can be sold at a Store for 30,000 Credits, making it the most valuable treasure found in the game.

In Dead Space 2, the Treasure can be found in Chapter 7: Power from the Sun. After using Watchman Phillips' corpse to unlock the door of his office and navigating three successive corridors to come upon the mainframe room, there are two chambers you must enter to defeat the mainframe's lockout. When you arrange the circuits shown on the diagram they will turn blue instead of green. Upon completion, another reroute button will become exposed. Use that button to rotate the access hatch to enter the back room; The Treasure is found in the back of the room, in clear sight, sitting upright on the floor. Collecting the Peng Treasure will award the player with the Achievement/Trophy 'Collect Peng.' It can be sold in the Store for 10,000 Credits. The room itself is also filled with other goodies, including Power Nodes

In the Dead Space 2: Severed DLC, the Peng Treasure returns. It can be found near the first maintenance access point that Isaac Clarke used in his escape from Titan Memorial Medical Center in the boiler room. Once collecting The Treasure, the player will be awarded with the Achievement/Trophy 'Peng Me Again'.[1] It can be sold for 10,000 Credits at the Store.

In Dead Space 3, The Peng Treasure is found in Chapter 14: Everything Has Its Place, during the optional mission to the Reaper's Barracks. The Treasure can be found in the end of the first tube behind the spiked piston. An upgraded Kinesis is required to reach the treasure. It is not worth anything unlike previous games, other than the Achievement/Trophy "There's Always Peng!". 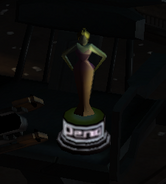 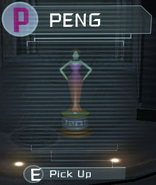 The Peng Treasure, as seen in Dead Space once picked up. 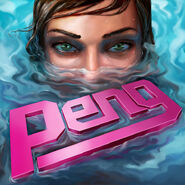 Peng poster as it is featured on Titan Station. 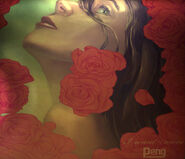 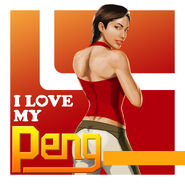 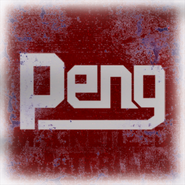