"Fucking thing!"
—Isaac Clarke after encountering the Snowbeast for the first time

The Snow Beast is a large Necromorph that appears on Tau Volantis during the events of Dead Space 3.

Because of its large size (approximately 14 feet tall), the Snow Beast is likely either made up of multiple human corpses or is a Necromorph version of a creature indigenous to Tau Volantis (this is implied by several S.C.A.F. logs). It uses its long tentacles and incredibly fast tongue to catch prey. It has yellowish tissues on its back tentacles, which are particularly vulnerable to damage. If these tentacles are dismembered, a secondary set of tentacles appears which, when fired upon, critically damages the Snow Beast but regenerates over time.

The Beast is very resilient, powerful and relentless, but is also intelligent for a Necromorph, as it will retreat when it is injured.

The Snow Beast is first encountered in Chapter 8 after the crash on Tau Volantis, when Isaac and Carver follow the trail of flares left by Ellie. The Necromorph appears suddenly from a cliff, knocking them down to the bottom of the cliff. When they get up, the Snow Beast is nowhere to be found although its roar can be heard whilst they are exploring the area and it can be briefly seen climbing on the outside of the buildings around the pipeline, suggesting that it is hunting Isaac and Carver.

The Snowbeast is fought for the first time in Chapter 9 at the S.C.A.F. base. It ambushes Isaac and Carver in a Cargo Lift and the weight of the creature causes the lift to crash, although both Isaac, Carver and the Necromorph are unhurt. After a short battle, the two manage to drive the creature off.

The Snowbeast reappears in Chapter 11 where it attacks Isaac during his return journey through the Staging Yard, but flees after sustaining further damage to its tentacles.

It makes a third appearance in Chapter 13 where it attacks the cargo lift in which Ellie, Carver and Santos are travelling. Although Ellie and Carver escape, Santos remains trapped in the cage and the Snow Beast's weight begins to cause the cliff to collapse. Despite Isaac's attempts to rescue her, Carver cuts the lift cable, sending Santos and the Necromorph to the bottom of the cliff.

However, the Snow Beast survives the fall and it climbs up the ledge, causing the cliff to break and Isaac and Carver to fall to the bottom where they discover several grappling stations. The Necromorph makes one final attack but they are able to use the harpoons to restrain the creature. Isaac activates the winch and the harpoons rips the beast apart, finally killing it.

If Isaac or Carver runs out of health, the Snow Beast will launch a tentacle into his chest. It will then break his back and pull him into its mouth, proceeding to eat him. Isaac or Carver will struggle to escape, but will inevitably be devoured with their body split in half. 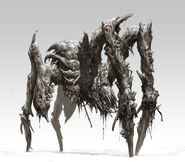 The Snow Beast prepares to attack

The Beast attacking Isaac with its three tentacles out 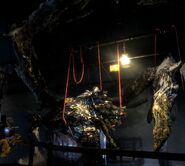 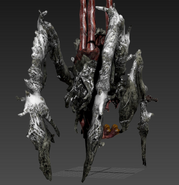