The Ubermorph was a unique Regenerator-type Necromorph encountered on Titan Station during the final moments of the outbreak.[1]

The Ubermorph is a tall, bipedal Necromorph that resembles a Slasher in both body shape and proportion. However, its features bear a strong resemblance to those of the Hive Mind encountered on Aegis VII. The Ubermorph's head is connected to its body by a short, stiff neck, and its face features five glowing eyes. The Ubermorph's bulky torso supports several massive arms, and sports a pair of claw-like appendages on its abdomen. The bone structure of the rib cage is clearly visible both on the front and rear, with the back also sprouting small arms. The Ubermorph utilizes its two enormous arms, each ending in three long claws, to impale, slash and mutilate its prey.

This creature's unique characteristic is its ability to regenerate lost tissue mass and bone at an astoundingly rapid rate, making it virtually impossible to kill; this ability is shared by the Hunter, a Necromorph created by Dr. Challus Mercer on the USG Ishimura, and also by some dormant Necromorphs in Tau Volantis.

The origins of the Ubermorph are shrouded in mystery. In the graphic novel Dead Space: Salvage, a creature greatly resembling the Ubermorph can be seen aboard the USG Ishimura's wreckage in one scene. If this is indeed the creature encountered by Isaac Clarke, then it might have entered the Sprawl sometime when the Ishimura was docked in port for maintenance.

Unlike most Necromorphs, the Ubermorph does not display many physical signs of decay or open gashes or lesions on its body. It has dark brown, smooth skin covering its body, lending it a uniquely alien appearance and is presumably made with the body of at least one person with the added bodymass of the corruption. A variant of Spitters in Dead Space 2 have lumps on their faces that match the Ubermorph's eyes, suggesting that the Ubermorph may have mutated from a female host.

Another common theory is that the creature is an early stage of a Hive Mind's life-cycle: the Necromorph's head, chest and additional limbs over its shoulders are very reminiscent physical features to the Hive Mind found on Aegis VII. Another point to suggest this theory is true is that Hive Minds are Necromorph commanders, controlling the intelligence of Necromorphs in a certain region and the Ubermorph might demonstrate this when Isaac opens the bulkhead door to the Government Sector, as the Ubermorph slowly walks among the charging Slashers, Pregnants and Pukers. It possibly commanded this horde to assault the Government sector to clear a way to the Marker 12B.

When the Necromorphs proceeded to swarm the station, the Ubermorph travelled with many of its kind toward the center of the station where the Marker, the cause of the outbreak, laid waiting for Convergence. The Ubermorph's roar can be heard at the beginning of Chapter 11 and the creature is first seen entering the EarthGov facility in Chapter 13 when Isaac removes the power to the bulkhead door, allowing the Necromorphs to enter and slaughter the soldiers. It cannot, however, be fought or encountered until Chapter 14.

As Clarke accessed the secrets of the Marker using the NoonTech Diagnostic Machine, the Ubermorph moved on him. He led the creature on a mad chase through the laboratory, utilizing various weapons and techniques to slow the rampaging monster. Underpowered and on the run, Clarke shut the Ubermorph out from the Marker's storage area and was able to destroy the Marker. The Ubermorph was destroyed as the Marker's destruction breached Titan Station's reactor core and caused it to explode, killing everything on the station.

The Ubermorph is subjected to multiple bugs and glitches that causes the creature to disappear completely from play. Unlike the Hunters on the Ishimura and Tau Volantis, which has multiple spawn scripts that generates them at multiple points throughout the game, the Ubermorph uses only a single spawn command that, once the creature is "killed", will no longer generate another Ubermorph to stalk the player.

Not counting the bugs and glitches, the Ubermorph is the only regenerative Necromorph so far to not have any method provided in-game to destroy it. The Hunter was burned by the Executive Shuttle's test fire, while the Tau Volantis Hunters in Dead Space 3 can be blown up using special military ordnance. 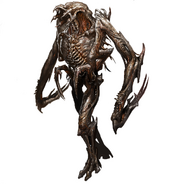 Concept art for the Ubermorph.

Close up view of the Ubermorph from Dead Space: Salvage.

The Ubermorph after Isaac's Death Scene.

The Ubermorph, with skin and back details visible.