Some time after the station's explosion

"Never thought I'd be so happy about seeing the Sprawl."
—Gabe Weller[1][2]

Titan Station (colloquially known as The Sprawl) is a civilian space station built into the last remaining fragment of Titan, one of Saturn's moons and the site of the first planet crack. Titan Station itself encircles the Shard of Titan as a large metropolis, with inner structures such as schools, malls, skyscrapers, and a Unitologist church. The population of the station exceeds one million people. The Titan Station Security Force is the law enforcement on Titan Station. The CPD is a repair company on Titan Station.

The Sprawl is split into two distinct sectors―Public Sector and Government Sector. Three "crossover tubes" provide transportation between the two, and act as a docking platform for ships. During the incident, Vandal opens the crossover tubes, allowing the Necromorphs from the Titan Mines to enter the Public Sector.

Public Sector takes the form of a large semicircle surrounding the Titan Shard, with large towering buildings and structures on its upper and lower sides (the lower side is known as the inverted city, and the 2 are connected via gravity-adjusting elevators). The most notable structures of this Sector are the Titan Memorial Medical Center, the Titan Heights apartment complex, the Concourse shopping mall, the Cassini Towers apartment complex, the Church of Unitology, the Titan Elementary School, the Solar Array, and the CEC Facility.

Titan, a moon orbiting Saturn, was selected as the site of the first moon harvest (an early form of Planet-cracking). A large colony was established on the surface of the moon to study its geology and prepare it for mining. The moon was successfully cracked and 'harvested', only slightly behind schedule, satisfying the immense resource needs of humanity (who believed their extinction was imminent).

Titan's harvest was halted for unknown reasons before the entire moon was dissasembled, leaving the small shard where the colony had started. As planet cracking became more common, the station experienced rapid growth as it functioned as both a critical research outpost and a way station for deep space mining operatons.

Titan Station felt the effects of the Ishimura incident in the years leading up to the outbreak, due to the decline of the planet cracking industry. Unemployment rose as mining support services and the CEC posted heavy quarterly losses. The station did experience a small economic boost however, due to grants received from EarthGov's classified scientific research.

"There are Necromorphs everywhere. Is the entire Sprawl infected?"
—Isaac Clarke

Over the course of three years after Isaac Clarke was rescued from his escape shuttle, Director Hans Tiedemann and his lead scientists committed Isaac and Nolan Stross to the Medical Center. While committed there, the codes of the Marker were extracted from both of their brains, and using these codes, they were forced by Tiedemann to construct a monumental Marker so he could obtain its power. After its completion, many citizens, especially children, became anxious and violent outbreaks of homicide and suicide were committed like before on the USG Ishimura and Aegis VII.

Although its origin is never actually revealed, the Necromorph infection once again awoke and spread throughout the Sprawl. It is entirely possible that the Church Of Unitology was aware of EarthGov's Marker experiments. They sent unwitting worshipers deep into the mines of Titan where they committed suicide in the presence of the Site 12 Marker's signal that apparently started leaking through the containment shell protecting the Marker, therefore becoming the first Necromorphs. To back up this claim, Vandal from Dead Space mobile was a Unitologist who was aiding in the spread of the infection by releasing the outbreak to spread to the public sector. Also, Tyler can be heard reporting that the Necromorph infection was a success, further substantiating that the Church was fully aware of the relationship between the infection and the Marker.

This theory is heavily hinted upon in Dead Space 2 as Isaac comes across various logs indicating Unitology was responsible for the infection. The infection and Necromorphs spared no one, butchering families and children indiscriminately. Martial law was declared by Director Tiedemann, who also (against previously set protocol for any sort of Necromorph outbreak) ordered the station to begin evacuations; it is unknown how many people actually managed to be evacuated before the Public Sector was declared "lost".

During this time, Isaac Clarke managed to elude Tiedemann's forces, resulting in Tiedemann cutting off power and life support to the Transport Hub in an effort to deter Clarke from reaching the Government Sector and destroying the Marker. When this gambit failed due to Isaac reactivating the decommissioned solar arrays for the station, Tiedemann resorted to directing the focused beam of energy from the solar array to slice through all of the connections between the civilian areas of the Sprawl and the Shard, effectively cutting the Sprawl in two.

This once again failed to halt Isaac's progress, who proceeded to use the gravity tethers of the docked USG Ishimura to drag the Shard back towards the rest of the Sprawl, allowing him access. Once on the Shard, Isaac and Ellie Langford managed to penetrate the EarthGov compound via a mining drill, which also allowed the Necromorphs to infiltrate the facility. Isaac was almost killed by a large group of EarthGov soldiers blocking his way further into the station, but managed to avoid them and proceeded to cut the power to the area, which opened the doors and let in a massive horde of Necromorphs, including a Regenerator type Necromorph known as the Ubermorph, which then overwhelmed and slaughtered the barricade of EarthGov soldiers. The mass of invading Necromorphs were able to reach the Marker, triggering a Convergence Event, which was halted at the last moment by Isaac destroying the Marker through apparently fighting a hallucination of his long dead girlfriend Nicole Brennan.

In the end, the damage caused to the Sprawl by the massive release of energy from the Marker's destruction, along with all the other damage it had sustained, destabilized the station's reactors, causing a meltdown. The fate of the Sprawl is revealed in the epilogue after the credits, which conveys that the Sprawl was completely and utterly destroyed by the ensuing explosions.

A medical facility located in the Public Sector. Isaac awakens here after the facility has been besieged by Necromorphs. When Isaac does awaken, he is overcome with fear at the carnage.

An apartment complex located very close to the medical center. It provides several floors worth of apartments.

Isaac arrives in the complex just as Necromorphs begin attacking. Several innocent civilians are seen being slaughtered as Isaac battles his way to the tram station.

A two-story shopping mall located in the heart of the Sprawl. The stores are locked down when Isaac arrives, and the many abandoned shopping bags and pools of blood indicate that the Necromorphs attacked during normal operation hours.

An apartment complex on Titan Station. Unlike Titan Heights, the Towers seem to be inhabited mostly by Unitologists. In the center of the two apartment wings, there are four statues dedicated to Unitology. One of them is a large Marker statue that stands close to the window, and south of it are three masked Unitologist statues. Behind the three statues is an entrance to the Church of Unitology.

Upon Isaac's arrival, the Towers are covered in graffiti and littered with the bodies of those who had committed ritualistic suicide according to their faith.

The Solar Array used to be Titan Station's main power source until it was replaced by fusion reactors.

The following below is a list of Titan Station's inhabitants before and during the time of the outbreak. 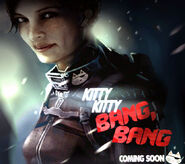 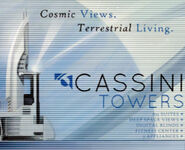 The local mall called "the Concourse."

There are many buildings and skyscrapers on the Sprawl.

Another view of the Sprawl.

A View of The Sprawl 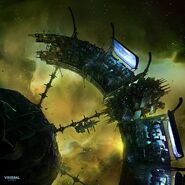 Overview of the Sprawl