"Jesus that thing was angry!"
—Isaac, after fighting a male Tripod for the first time.

The Tripod is a large three-legged Necromorph composed of multiple human corpses.[1]

There are two types of Tripods: Male and Female. Both are extremely violent, even by Necromorph standards.

Males are the more common type of Tripod Isaac encounters on the Sprawl. He is a massive Necromorph, comparable in size to a Brute, formed from numerous hosts. He attacks by swinging his arm in a wide arc, slamming his fist into the ground, flailing around his bladed tongue, or by pouncing on its victim from a distance. His only weak points are three yellow pustules (one on each arm, and one on the tongue). After both arms are dismembered, he will finally die. However, after losing one arm he will use his bladed tongue to attack. Destroying this will kill him, but occasionally he may continue to attack. The areas they are encountered in are almost invariably very large, open and usually circular.

Only one female Tripod is encountered in Dead Space 2. While also formed from multiple corpses, the primary host appears to be a human female. Most disturbingly, an infant's body and limbs are seen growing out of the Tripod's tentacle.

A Female Tripod is encountered by Isaac in the Church of Unitology. The Tripod first pounces on Isaac from above, knocking him to the ground. She then grabs and drags him across the floor, attempting to hit him with her bladed tongue but Isaac dodges it. The tongue acts similarly to a Drag Tentacle, except with a yellow sack made from an infant as a weak point. Once Isaac shoots the sack enough times, it will explode, rendering the bladed tongue no longer effective, and the female Tripod will release him and retreat. However, hitting her about 30 times in the body with the Hand Cannon on Casual or Normal will kill her. 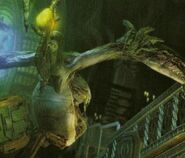 The childlike sack that is the Tripod's weakness.

The Tripod in the downloadable wallpaper from the official website.

The Tripod rams its scythe into Isaac's mouth.

Isaac being dragged by a female Tripod.

Another shot of the Female Tripods face. 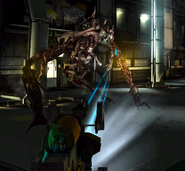 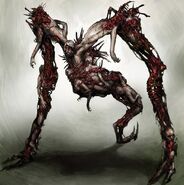