"The infection process is doing something strange to these soldiers. They all had built-in Stasis units in their body armor. The infection is merging the Stasis unit into their flesh or something... making them move fast... real fast. Be careful."
—Zach Hammond[1]

Twitchers are specialized Slasher variants created from hosts equipped with stasis modules. They are first encountered in the ruins of the USM Valor, and later spread into the USG Ishimura. They additionally appear on Aegis VII and on the Sprawl in Dead Space 2: Severed. They also make an appearance in Dead Space 3 on Tau Volantis.

The Twitchers are the result of the Necromorph infection converting the corpses of people who were equipped with built-in Stasis Modules (such as soldiers, security personnel or special division scientists). They are physically similar to Slashers in most aspects.

A disturbing side-effect of the transformation is that the Stasis modules become fused with the resulting creature, and the effect of the Stasis Module are strangely reversed, with terrifying results. Because of the reversed Stasis Module merged into their bodies, Twitchers can react and move several times faster than any other Necromorph variant, making them very hard to hit before they close in to melee range. It also causes them to have highly erratic and spastic movements, and their features seem to blur as they move when seen close up. Due to their incredible speed, they are very capable of dodging Isaac's weapons in harder difficulties when they see it coming. They also make distinctive jabbering noises when they get close.

Their name is derived from their constant twitching and spasmodic behavior. Their design is similar to that of a Slasher; however, this is hard to notice due to their speed. Their heads, legs, and bodies retain a vaguely human form, albeit much chunkier and muscular than Slashers (likely due to the fact that the infected soldiers or security personnel tend to be more well-built than civilians). Some lack the small chest appendages of the Slashers, but their talons are much larger. Their heads have a massive, hollowed-out indentation on the top of the skull, and tiny tentacles fill the gap. They also seem to be missing both of their eyes. Furthermore, their faces seem to be almost static; they never change their facial expression, which is fixed in a blank and hollow stare.

They will oftentimes bend themselves backwards and walk on their human legs and their slashing blades while the talons protruding from their stomach wave in the air. This can cause it to be potentially difficult to dismember them, since it protects their blades.

The infected Titan Station security officers, Oracles and S.C.A.F. science division miners remain largely humanoid and still wear most of their armor, so they don't seem to be as extensively infected as the Valor's marines. However, they are still just as deadly.

Marines and colonists of the Aegis VII that have a stasis unit installed on their RIG suit will turn into Twitchers. These variants are only encountered in Dead Space after the USM Valor collides with the USG Ishimura as well as down in the colony on the planet.

The victims have their armor torn off during the mutation. The top part of the skull is cut off with the brain having gone missing, with only blood vessels tangling in place. The face is stuck in a lifeless expression with the eyes having disappeared.

The abdomen muscles and skin have been ripped off, with the intestines being visible.

The host's shoulder blades have expanded outwards, making it look like the Twitcher has wings, giving them a unique appearance.

The blades are sprouted from the host's original hands that the Necromorph uses to cut its victims.

EarthGov soldiers that have a stasis unit will mutate into a Twitcher. They look exactly the same as their common Slasher counterpart, except they have superior speed and strength.

The most unique type of Twitcher. Only two are encountered in the series, created from the Unitologists who attempted to kidnap Lexine Murdoch for further experiments.

Unlike the two previous variants, these Twitchers have a completely new set of bladed arms created from muscle and bone. The original arms are stuck in a crawling position on the Twitcher's chest. The head is highly mutated, with two glowing eyes and two mouths. The head has grown larger and turned red, presumably from excessive blood build-up.

These Twitchers were once miners that were part of the Science Division of the Sovereign Colonies Armed Forces. They are first encountered on the mountain Research Compound of Tau Volantis, first seen lurking in the distance before making an appearance just after two Circle soldiers ambush Isaac and Carver, who are heading back to the Biology Sector.

Compared to the previous variants, they are highly superior in speed. They do not stop attacking with each strike and will attempt to surround the player in numbers, even when getting hit.

These Twitchers still wear the miners' original clothing along with a flashlight attached to the former shoulder that has a mutated blade arm now in place. The original hands are cut off from the arms for unknown reasons with a pair of new blade arms sprouting from the back.

The Twitchers wear some sort of masks with two pointy protrusions near the jaw. The host's lips are torn off with the skeletal mouth being visible. The head appears to be completely bald as well. Some sort of mutated veins go around the Twitcher's chest and top part.

Concept art of a Twitcher.

Early concept art of a Twitcher.

Face of the Police Twicher.

A close up of the Dead Space 3 Twitcher concept art 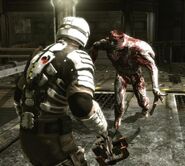 The Soldier Twitcher from Dead Space. 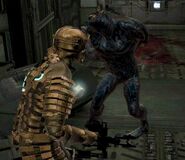 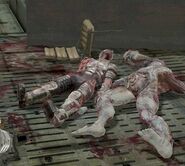 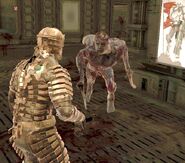 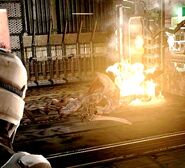 Rear view of an Oracle Twitcher in Dead Space 2: Severed. 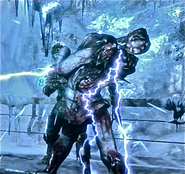 A pair of Deep Dig Team Twitchers in Dead Space 3.