"USG Ishimura, this is the emergency maintenance team of the USG Kellion responding to your distress call. Come in Ishimura."
—Corporal Chen[2]

The USG Kellion was a CEC shuttle dispatched to the USG Ishimura.

The USG Kellion was dispatched to the USG Ishimura as part of an emergency maintenance mission to determine and repair the cause of the communications blackout. Following the vessel's successful shockpoint into the system, the Kellion approached the Ishimura; however, the larger vessel failed to respond to the repeated hails.[note 2] Attempting to enter the Ishimura via an automatic docking procedure, a drifting piece of planetary debris smashed into the starboard bow and slid across to port, this resulted in a malfunction of docking and autopilot, mandating an emergency landing inside the Ishimura's Flight Deck hangar.[2][note 3]

The Kellion seems to have a similar design to the Ishimura's shuttles, with the only difference being the addition of a quad-booster array attached to the main body, likely the ShockPoint Drive system. It is also equipped with armor plating that can slide down over the cockpit windows, protecting the occupants in case of an emergency situation.

After the events and discoveries made aboard the Ishimura, Isaac Clarke is sent back to the shuttle by Zach Hammond to prep it for launch, only to discover that it had been damaged by Necromorphs. When he goes aboard and loads a damage report, a Leaper can be seen crawling over the damaged cockpit window. They may have attacked the shuttle due to Isaac's presence, as a fire breaks out and spreads through the shuttle, causing terminal damage to the ship. Isaac barely escapes back onto the flight deck before the Kellion falls to the floor of the hangar bay, completely destroyed. 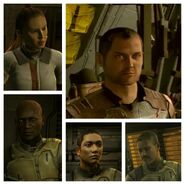 The emergency crew dispatched to the Ishimura.

The Kellion arrives, responding to the Ishimura's distress call.

The Kellion moments before it's destroyed.
Add a photo to this gallery

Retrieved from "https://deadspace.fandom.com/wiki/USG_Kellion?oldid=152322"
Community content is available under CC-BY-SA unless otherwise noted.