"Norton, which ship is the Eudora?"
—Isaac Clarke

"The bigger one that just flew over your head!"
—Robert Norton

The USM Eudora is an EarthGov vessel captained by Robert Norton.

The Eudora was tasked with finding Isaac Clarke on the New Horizons Lunar Colony before Danik and the Unitologists could kill him in the uprising. Catching up to Isaac as he escaped the city on a train, the Eudora fended off two Unitologist gunships over the train before picking up Isaac and shocking away from the Moon.

Following the vessel's successful blind shock to Tau Volantis, the ship was almost struck by the debris, but it's pilot, Rosen was able to maneuver around it. Attempting to locate Ellie Langford's ship, the Eudora was attacked by the automated mines and the bridge was severely damaged before the ship began to fall apart.

After the Eudora began losing power, Isaac ventured through the collapsing ship to reach the EVA Suit and helped the rest of the crew jettison from the crumbling craft into the debris field toward the CMS Roanoke as the Eudora exploded.

The Eudora's design is a large H shaped bow section that retreats into a hunched mid section and three sets of thrusters off the aft of the ship. Two of the thrusters can pivot downward to give the ship a vertical take-off and landing effect while maintaining forward flight. These adjustable verniers allow the ship to maintain a hover if needed. The ship's weaponry systems consists of light batteries which are able to fire a green colored laser. The armaments are vulnerable to fire however; as is seen when they are destroyed in an engagement with Unitologist gunships.

The ship's main weapon consists of a light battery which fires what appears to be concentrated balls of green plasma that can take out Unitologist gunships in a single shot. However, the battery is vulnerable to fire as it isseen when a Unitologist gunship destroys it in the enagement on New Horizons. The Eudora also has heavy munitions on board to deal with larger ships or structures as it is demonstrated when the Eudora destroyed the massive Ptolemy Station.

Smaller than the USM Valor and the USM Abraxis, the USM Eudora featured four known sections, a command bridge, a living area consisting of bunk beds and tables/chairs, a dedicated sanitation area including showers and lockers, and a large room containing a ramp mechanism which appears to be large enough to accommodate cargo. The ship also features an automated voice warning function like all the other ships in the Dead Space series. It did not appear to have blast shields like the USG Kellion. The ship had numerous life preservation devices located around the interior as well as a dedicated escape module. This module was used by Rosen and Locke after the ship's destruction. The module was a large cubic room that Isaac had to manually launch from the ship and follow, along with Carver and Norton, to the CMS Roanoke.

Back of the USM Eudora

Side view of the USM Eudora

Front View of the USM Eudora

The unknown co-pilot on CMS Eudora (on the right, next to Robert) 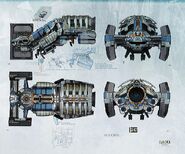 Concept art of the USM Eudora

Example of shields on the Eudora 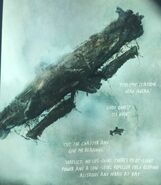 Ptolemy compared to the Eudora
Add a photo to this gallery

Retrieved from "https://deadspace.fandom.com/wiki/USM_Eudora?oldid=152447"
Community content is available under CC-BY-SA unless otherwise noted.