"This is the USM Valor, widecasting on all frequencies to USG Ishimura in response to your SOS."
—USM Valor Comms Operator

The USM Valor was a Destroyer-class vessel of the Earth Defense Force captained by Commander F. Cadigan. A fifth the size of the USG Ishimura, the Valor possessed formidable firepower and was emblematic of its class.

The USM Valor was deployed to assist the effort to reclaim Marker 3A undertaken by EarthGov and spearheaded by Kendra Daniels, and so journeyed to the Aegis System to retrieve it from the USG Ishimura. When it managed to raise the Ishimura thanks to the efforts of Isaac Clarke and Daniels, its comms officer relayed the news that one of the Ishimura's escape pods had been recovered.

Unfortunately, this escape pod contained a Necromorph that CEC operative Zach Hammond had successfully contained and jettisoned via the pod. The Necromorph attacked the Marines on board the Valor, and Commander F. Cadigan was forced to mobilise all personnel against it. The Valor lost control, however, following the deaths of its helm officers, and listed headlong towards the Ore Storage Deck of the Ishimura. The Valor was encountered by Isaac Clarke after he killed the Slug, which was blocking the Ishimura's comms array blast doors, with the armament of a Cannon Pit. Isaac was unable to avert the crash with ADS Cannon 48, and the Valor crashed, causing incalculable damage to the larger ship and itself.

Cadigan's personnel fought bravely against the Necromorphs, many of which had been members of his crew. With more boarding his ship from the Ishimura, the tide of battle was with the horde, and Cadigan went down along with the rest of the crew.

Isaac Clarke boarded the Valor to retrieve its singularity core in order to power a shuttle to escape the Ishimura; unfortunately, in the process of doing so, which involved fighting through numerous Necromorphs, including a new breed formed from the ship's complement of Marines-Twitchers—Isaac's compatriot Zach Hammond was killed by an Enhanced Brute, and the Valor's engine was destabilized due to a catastrophic failure of fuel containment, causing substantial damage to the Ishimura. However, the singularity core was successfully retrieved by Isaac despite the damage its removal caused, giving him, Kendra Daniels, and Dr. Kyne a chance to escape via a surviving Executive Shuttle.

Daniels would later attribute the role of the Valor to her efforts to retrieve the Red Marker after she betrayed Isaac Clarke and Dr. Kyne at the Ishimura's Flight Deck, stating that her mission succeeded even with the loss of Cadigan and his crew.

Afterwards the Ishimura was recovered by EarthGov and it eventually ended up at Titan Station, where all traces of evidence regarding the Necromorph outbreak were wiped out and the ship underwent a period of structural restoration. As part of EarthGov's falsified reports of the Ishimura's destruction at the hands of terrorists, the wreckage of the Valor was most likely disposed of in the process to support their cover up.

A large, long room containing a Bench and an array of long weapons lockers containing multiple Pulse Rifles and ammunition. A subsection of the area served as the Shooting Gallery.

The Shooting Gallery was a subsection of the Valor's Armory where off-duty Marines could practice their accuracy and shooting skills on holographic human-sized targets. Hitting all of the red targets and none of the blue targets earned the player points, with the maximum achievable score increasing with each level. If the shooter was able to hit all red targets without any "friendly fire," he was rewarded with a useful item, such as ammunition, med packs, Semiconductors and, on the fifth level, a Power Node.

A long room (among the longest in the ship) lined with personnel bunks on both sides where the Valor's Marines and custodial crew slept. The personnel bunks were slightly smaller than the crew bunks on the Ishimura, but appeared to have drawers and cabinets on the walls for storing personal items. In between the two rows of bunks were walkpaths and columns with supply cabinets and EDF propaganda posters. On the far side of the barracks was a store for the soldiers to use and a ship administrations office. The bunks were festooned with touches such as notes, letters, and photos. By the time Isaac Clarke reached the Barracks, they were swarmed with waves of Twitchers, Lurkers, Exploders , Leapers and one Pregnant. Clarke was successful in expunging the infestation.

The storehouse of the Valor. It was the storage center for the ship and its Marine and custodial complement, and supplies of water, fuel, ammunition, field rations, weapons, oxygen supplies, Stasis Packs, medical supplies, and associated paraphernalia were stored here.

A very large two-level room containing the Valor's medium-size ShockPoint Drive. It was divided into two sections: the first was the Drive Deck, a dangerous level that was dominated by the ship's ShockPoint Drive and Engine Reflux Tubes. The second level was the Engine Room proper, where the ship's propulsion systems functioned; the singularity core was contained here behind a shield, which Clarke deactivated to gain access to the component. The Engine Room would be the epicenter of the ship's destruction when the core was removed.

The Infirmary was a medium-sized cabin used as the sickbay and operating room for the Marines and other personnel. It was equipped with multiple patient beds, scanning and medical equipment, and a variety of surgical tools, most notably a large laser cutter device that had malfunctioned, causing it to spin erratically and cut down anything that came within reach.

The Torpedo Room was the armament storage and deployment center for the Valor, and was in ruins when Isaac Clarke entered it. Nicole Brennan appeared on a vidscreen in the room, a hallucination of Clarke's.

The Valor was armed with a complement of nuclear missiles, one of which was cracked open when the Valor crashed into the Ishimura. Due to a safety lock engaging because of the radiation hazard this posed, Clarke had to dispose of the nuclear debris before he could enter via one of the Valor's airlocks. In addition to the armaments of the ship itself, the Marines aboard the Valor had access to a wide variety of military-grade versions of the standard tools located aboard the USG Ishimura and on Aegis VII. The main armory was also fully stocked with racks of the SWS Motorised Pulse Rifle, although these were not accessible to Isaac.

The Marines aboard were either killed or transformed into Necromorphs, although Isaac Clarke did encounter three non-infected Marines, one who died shortly after he was encountered; one who was pinned to the ceiling by a damaged gravity panel; and one Marine who escaped through a hatch to an unknown fate. Because the Marines had stasis modules in their Advanced Soldier RIGs, when they were transformed into Necromorphs they were able to move many times the speed of regular Slashers, and were referred to as Twitchers. The Marines also carried Pulse Rifles, but the Twitchers did not make use of these.

Concept art of the USM Valor.

Concept art of the USM Valor included in The Art of Dead Space.

A starboard view of the USM Valor. 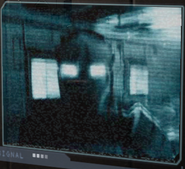