Unknown, possibly sometime in or after 2511

"FOR OUR ALTMAN!"
—Foot Soldiers before committing suicide

The Unitologist fanatics were a rogue extremist arm of the Church of Unitology led by Jacob Arthur Danik. A militant sect of religious fanatics, they were actively deposing Earth Government authority throughout the galaxy in the name of "freeing" the Markers from Human control in the name of nature.[1]

According to one of Danik's logs, the fanatics had membership that numbers in the millions.[2] It isn't clear if there are any remaining Unitologists who do not belong to the group as of 2514. Members of the organization were fiercely fanatic, zealous in their loyalty to both the Church and their leader.

They are shown to possess considerable resources, its members were well armed and equipped, carrying various weapons such as assault rifles, shotguns, stasis and explosive grenades, and rocket launchers. They also commanded a small fleet of dropships which facilitate their propagation against EarthGov.[3]

Most members of the zealots adorn their apparel with Marker Symbols in an apparent show of their dedication to the message of the Marker and Unitology. Zealots encountered by Isaac Clarke did not appear to possess proficient combat training - only basic training, as they are slow to aim, stand tall in the middle of firefights, and did not use cover effectively. Often, they will attempt to hide behind something but still leave parts of their body visible or leave cover in the middle of combat. Other times they will abandon cover completely to fire on their opponent without regard to their own survival. Their proficiency with weapon emplacements on their dropships are also inadequate, as they still have problems tracing and firing even when their targets are moving out in the open.

Footsoldiers of the fanatic group commit ritualistic suicide like other Unitology members in previous Dead Space games, by slitting their throats, rather than stabbing themselves in the forehead. In combat, soldiers will run up to an opponent with live grenades in a suicide attack that result in devastating damage to their surrounding environment.[1] On one occasion, a member turned a shotgun on himself while screaming "One Mind, One Body" before pulling the trigger.

"Children of Altman, the Marker has a plan for all of you! When the time comes, you will be reborn! But for that to happen, Isaac Clarke must die. The future of our religion - our race - depends upon it. Stop him at any cost! Altman be praised!"
—Danik to his soldiers

Danik and the zealots under his command are led to the planet of Tau Volantis by Captain Robert Norton of the Earth Defense Force in the hopes of killing Isaac Clarke; the "Marker Killer" whose continued resistance against the efforts of the Unitologists to bring about "Convergence"[4] as well as seeing the incomplete Convergence Event of the planet completed with the Codex once Danik learned about the nature of the device that Ellie Langford was searching for.

Initially, the forces deployed on the planet were numerous, however, they encountered heavy resistance from the waves of Necromophs on the planet that prevented them from successfully killing Isaac and his team. Issac was constantly caught in between the crossfire between the fanatical Unitologist Soldiers and the nightmarish Necromorphs. At first, the Unitologist were caught off guard and face major setbacks, such as the numerous failed  attempts of killing Isaac and his team, or the scavenging of the Armory which resulted in much of the Unitologist Teams massacred by the Necromophs.

When Isaac and his team was on their way to a facility that housed Rosetta, Danik and his Forces were able to regroup, and utilize their dropships to deploy more Unitologist Soldiers and also searching for Isaac. They were able to fend the Necromorphs off (though some teams were unfortunate), and were continuing their search for Issac. When Isaac discovered the true purpose of the Machine, and unknowing explained to Danik, the Unitologists quickly made their way to the Research Compound Silo that would take them to the Machine. While Danik and his Soldiers boarded the elevator, the rest of the Unitologist Forces quickly scrambled onto the many platforms to protect Danik's Elevator, however, they faced heavy resistance from Isaac and John Carver,  and also were being massacred by the overwhelming number of Necromorphs. When Danik and his men reached the bottom of the Facility, every remaining Unitologist Soldiers were butchered by the Necromorphs. With the realization of the fact they won't survive for long, Danik ordered his men to contact for reinforcements.

Eventually, Unitologist reinforcements arrived to the Planet and deployed Dropships into the City.  Heavily armed Unitologist quickly set up defensive positions to block Isaac or any other Necromophs. Yet despite the dwindling number of survivors opposing them, they are unable to stop Isaac and John Carver from reaching the Alien Machine.[5][6][7]

In the aftermath of witnessing the Convergence Event and losing Danik,[8] the faith of the zealots deployed to Tau Volantis was shaken with several members finally embracing the futility of believing in Unitology. However, those who remained dedicated to their beliefs eventually gave rise to a new Unitologist Cult, dedicated to the worshiping of the Brethren Moons.[9] The status of the millions of the other members was unknown with the lack of information on the rest of the EarthGov colonies and the Brethren Moons invasion. 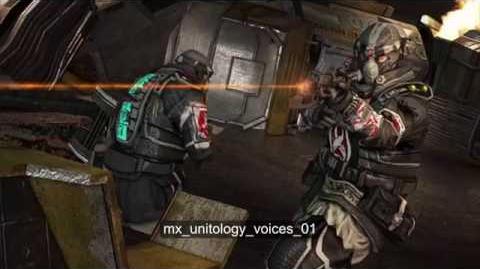 Concept art of the fanatics. 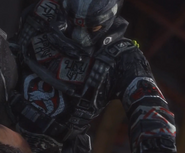 This zealot has tags on his uniform that read, "ONE","WHOLE", and "CIRCLE".