Dead Space Wiki
Register
Don't have an account?
Sign In
Advertisement
in: Articles with Spoilers, Characters, Deceased,
and 4 more
English

Col. Victor "Vic" Bartlett was a security officer on the Sprawl by acting as Gabe Weller's superior and the primary human antagonist in Dead Space 2: Severed.

Little was known about Victor prior to the outbreak beyond his role as the leader of Security Team Alpha[2] as well as its only survivor at the introduction of Severed.

Action on the Sprawl[]

The first to reach the surface after escaping from the mines, Victor urged Gabe to escape before he was overrun by the Necromorphs. On his way to the surface, Gabe overheard the order that was given by Hans Tiedemann to eliminate the "key subjects" on the station. He contacted Victor about the orders and received Victor's help in reaching his wife, Lexine. Victor told Gabe that he would pick him up in a shuttle on the surface and take him straight to the hospital.

Gabe reached the surface and Victor attacked him in a gunship. He told Gabe that he only attacked him because Lexine was on the list of the key subjects to be terminated and he did not want him to interfere. After Gabe damaged his gunship, Victor went to the Medical Center in the hopes of reaching Lexine first.

Victor monitored Gabe's RIG conversations with Lexine who was hiding in the ravaged hospital. Victor tried repeatedly to discourage Gabe's rescue effort by revealing the information on his and Lexine's status within a project known as "Project Oracle" which was the importance of Lexine's pregnancy to EarthGov. Victor ended up reaching her first by locking onto her signal. He successfully captured Lexine moments before he was incapacitated by two Oracles who kidnapped her, claiming they were following different orders. Victor was left unconscious on the floor of the hospital's asylum with his RIG blinking red.

During Gabe's attempt to hack into the shuttle bay doors to allow Lexine to escape in their shuttle, a wounded Victor reappeared with the left side of his face badly damaged. He grabbed Gabe and tried to kill him with a grenade, but took most of the damage himself. As a result of his proximity to the grenade, Victor was killed by the blast that mortally wounded his Sergeant.

﻿When Gabe was grabbed by Victor as he pulled the pin on a live grenade, they would fight for control of the explosive in a quick-time event. If the player failed the quick-time event, Victor would place Gabe in a headlock and they both died in the grenade blast. If the player was quick enough, they could catch Victor's smile as the camera zoomed in on his and Gabe's faces before the grenade exploded. 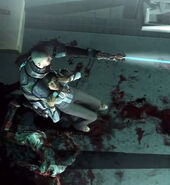