The Vintage Suit is a suit obtainable in Dead Space 2. Wearing it provides Isaac with a resistance to 15% damage, 20 inventory slots and a 10% discount for all items in the Store. Despite its bulky appearance, it does not slow Isaac down.

It is an old, antiquated CEC suit, consisting of a bulky brown space suit and a folding utility space helmet, as well as other various equipment, including an oxygen tank on the left shoulder plate, a heads-up display/holographic projector on the sternum, and a calculator on the left sleeve. The suit possesses various other tools necessary for a space walk.
Compared to later models, all of the above are noticeably outdated; for example, rather than being integrated inside of the suit, the oxygen tank is clearly visible on the outside.

The schematic can be found in a Power Node locked room early on in Chapter 8. If not picked up here it will be added to the store automatically in a later chapter. It can be purchased for 40'000 credits. 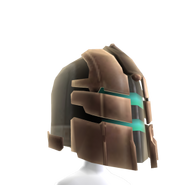 Overview
Add a photo to this gallery

Retrieved from "https://deadspace.fandom.com/wiki/Vintage_Suit?oldid=151167"
Community content is available under CC-BY-SA unless otherwise noted.