Dead Space Wiki
Register
Don't have an account?
Sign In
Advertisement
in: Articles with Spoilers, Characters, Deceased,
and 3 more
English

"Your lack of confidence in me is duly noted, Ms. Daniels, but I have a mission to complete and that's exactly what I intend to do. With or without you. Do we understand each other?"
—Hammond[1]

Zach Hammond was the Chief Security Officer of the USG Kellion. Hammond was one of the three survivors aboard the Kellion that made it past the Flight Deck on the USG Ishimura along with Isaac Clarke and Kendra Daniels.

During the CEC mission to the stricken USG Ishimura, Zach Hammond was in charge of the operation. In an initial Necromorph attack, Hammond tried to adhere to the original objectives, despite the increasingly disturbing events which began to unfold following the deaths of his subordinates, Johnston and Chen. Taking skillful command, Hammond made his way to the ship's Bridge and assisted Isaac Clarke in restoring the Ishimura's systems and the ADS. During this time, Hammond came into contact with several Necromorphs. One of these was secured by him in an escape pod and promptly jettisoned.

Following a mission to purify the Hydroponics Deck's air supply in which Hammond was incapacitated, Clarke lost contact with him for a protracted period of time. During this, a military vessel called the USM Valor was dispatched to retrieve Marker 3A from the Ishimura under the disguise of a routine patrol. However, the escape pod containing a Necromorph that Hammond had jettisoned earlier was recovered by the Valor. Despite the warnings transmitted to the warship by Kendra Daniels, who had secretly been assigned to the Kellion as part of the Marker recovery operation, the Valor's crew was swiftly infected and decimated by the Necromorphs and crashed into the Ishimura.

It was at this time that Hammond finally snapped under the pressure and called an abort on the mission. He re-established contact with Clarke and Daniels and planned to help everyone escape from the Ishimura via an Executive Shuttle that he came across on the Crew Deck. Isaac was led to believe that Hammond was withholding information regarding the mission by Kendra to illustrate him as untrustworthy.[2]

Hammond made his way onto the Valor and upon discovering the ship's deck logs discovered that the ship's presence was no coincidence as it was fully prepared for war. He eventually managed to meet up with Isaac near the ship's engine room. Unfortunately for Hammond, the officer was trapped by an Enhanced Brute. Hammond attempted vainly to defend himself, but was assaulted and killed by the beast. His corpse was used as a hammer by the Brute which attempted fruitlessly to kill Clarke. Hammond's body was left on the Valor as the vessel was rocked by internal overload.

Hammond was a dedicated security officer and believed that the mission always came first and was determined to complete their mission despite the Necromorph infestation. His discoveries on what happened to the Ishimura during their mission changed this view, causing him to instead focus more on keeping himself and the team alive.

Though Kendra consistently tried to make Hammond out as a man not to be trusted, Hammond’s actions were of the contrary as he worked with Isaac to try and escape from the Ishimura, going so far as to forsake the chain of command and abandon their mission.

Zach Hammond in command during the Second Aegis VII incident.

Hammond on the USG Kellion. 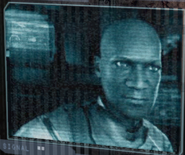 Hammond at the Captain's Nest.

Hammond at the Hydroponics Deck entrance.

Hammond, moments before his death.