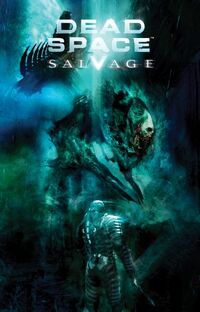 Buy this book from Amazon

Dead Space: Salvage is a graphic novel in the Dead Space series, written by Antony Johnston and illustrated by Christopher Shy. The novel was released on December 7, 2010.

"The USG Ishimura, the most famous of the Planetcracker class starships, is flung from orbit around Aegis VII after the disastrous events of Dead Space. It is lost somewhere in deep space, and both the Government and a powerful religious sect called "Church of Unitology" believe it may still hold the Red Marker, believed to be an alien artifact that promises great power for either side, and both will stop at nothing to reach it first!"
—Amazon's official summary for Salvage

Captain Benedykt Malyech of the Magpie ship Black Beak is chased in the halls of the Ishimura by a multitude of Necromorphs and subsequently turns into one before waking up. His adjutant, Julia Copland, comforts him before directing their attention to a motherlode of minerals.

In the meantime, the Earth Government's Defense Secretary David Chang arrives at the Aegis VII blockade. He is on orders to find the Marker and the Ishimura, both of which they are unable to locate. In addition, they are joined by the Oracles, who take control of the situation.

We return to the perspective of the Magpies, who are using a shockring to transport eggs (clumps of minerals) to their Nest (a large storage ship) when they get an odd reading. The Ishimura is shocked into their position and destroys their Nest with its captain, Bellevin, and damages the Hunter Moon, a ship commanded by Jessica Li and Stefan Schneider. They manage to use gravity tethers to hold the Ishimura in position and begin boarding.

The Ishimura is heavily damaged with most systems nonfunctional or malfunctioning. It is devoid of people or Necromorphs but is instead full of an organic sludge. Gatura Okeke, Stefan and Jessica explore the ship while Malyech investigates crystals on the side of the ship, which turn out to be Marker fragments; but when he gets too close to them, he blacks out and has a nightmare of being chased by an Ubermorph-like Necromorph. When he wakes up, he takes the shards and goes to the Ishimura.

Jessica decides to salvage the ship for parts and gathers the crew at the bridge. While they discuss the fate of the crew, Malyech shows them the pieces of the Marker. Li proposes selling the Marker shards, which prompts Malyech to assault her. He is brought down after a brief struggle and Venschiff, one of his crewmates, locks him up in the brig.

The crew realize that there might be a whole Marker on board but are panicked when Copland leaves for the EarthGov blockade with a few Marker shards. Li rallies the crew and gives them all tasks. Okeke goes down to engineering to repair the shockpoint drive. She also goes to see if Malyech has regained sanity. The rest of the crew keeps a lookout for EarthGov. Julia arrives at the EarthGov blockade and is not taken seriously until she produces Marker shards. Chang agrees to negotiate with her for a deal, but the negotiators are the Oracles. After revealing all the information, she asks for a "reward or something". Copland receives "something": death.

Malyech is awakened by a hallucination of Bellevin in the brig. It occupies his attention by informing him that he needs to be made whole. Meanwhile, the Necromorph biomass reanimates and consumes him, making him whole. Around the same time, Venschiff loses his mind and attacks Stefan in a paranoid frenzy. He tries to strangle Stefan but in retaliation, Stefan stabs Venschiff with a Marker fragment.

After the remaining logs are scanned, the crew realizes the Marker isn't on board. They relay the news to Li who is being stalked by a Necromorph. Just as they hear its hissing over the com, Malyech's Necromorph form drops down and kills Li. Suspicious, the crew decides to head down to Li's level, where a large Brute-like Necromorph rips Thorssen and Gottheddir to pieces in rapid succession. Stefan and Wenbo open fire on it but when Stefan destroys a relay, both the Brute and Wenbo are blown to bits. Stefan survives and warns Okeke to leave, but he and his crew are killed by more gargantuan Necromorphs in the engine room.

Both the Oracles and EarthGov arrive on the Ishimura, but the Oracles come on a stealth shuttle. Stefan speaks with the Marines and tricks them into going to the Cargo Bay, which contains Necromorphs. The Oracles realize the trick but leave them to their fate to buy time. They then proceed to activate quarantine protocols. The Marines led by Captain Amise search the Cargo Bay for the Marker and Stefan, but instead find Necromorphs and death.

Stefan fights through the Necromorphs but is trapped by the quarantine. While Stefan figures a way out, the rest of the EarthGov team is killed. Meanwhile, the Oracles destroy Necromorphs with ease using strange weapons. When they reach the Bridge, they realize that the Marker is destroyed and that Stefan was doing a space walk. They follow and confront him but are interrupted by a Hive Mind. The Oracles dispatch it and they continue their confrontation with Stefan inside. They corner Stefan but he threatens to shocking them all with a remote control. The Oracles partially reveal their motives but stop when they realize the 'remote control' is really just a radiation detector. Stefan makes a break for it and escapes through a hatch. The Oracle with the weapon loses his arm when the hatch shuts. Both the Oracles are then eviscerated by a mob of enraged Necromorphs.

Stefan uses their strange weapon to fight his way through the Necromorphs. His ship is swarmed by them so he decides to use the stealth shuttle of the Oracles in order to escape. He contacts EarthGov and informs them of the Ishimura's location. Chang orders him to stay, but Stefan insults him and shocks out to an unknown destination.